The Sydney GPO Extension was one of the largest projects undertaken by the Commonwealth in the 1930s – at a total cost of £1,000,000 for the building and the land (SMH 15 March 1939).  The Director of Posts and Telegraph, Mr (later Sir) Harry Brown, personally inspected the plans and told reporters that this project would suit the needs of his department for the next 10-20 years (Goulbourn Evening Post 12 January 1938).

The building contract was worth £400,000 and was a very significant contract for private builders to obtain.  In addition, as a modern building design adjacent to the historic Sydney General Post Office, issues around the design’s relationship to the original building arose.  Both these factors contributed to the intense political interest in the project – and, ultimately, to Henderson’s death the day before he was due to give testimony to the Royal Commission into the tender for this project. 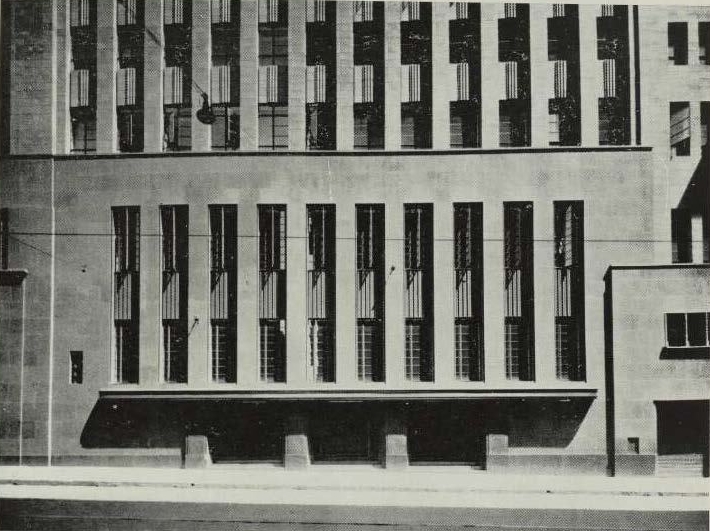 The building was 10 stories high and meant to accommodate a significant overflow of work for the Post Master General’s Department (PMG) at the GPO.  It must be remembered at this time that PMG did both mail and telephony and the new building catered to both.  The building extended from Pitt St to George St.  The GPO itself was also renovated internally to integrate with the extension.

Henderson designed the project in what Building magazine called “on modern lines”.  The base was clad in polished red Australian granite, and above that, architectural terra cotta.  The windows, main doors and lift doors were all in bronze.  The foyer was covered in coloured Australian marble trimmed in aluminium and bronze.  The design attempted to maximise window space between the vertical piers, the spandrel panels of which were set back to draw the eye up.

Front doors to the Extension

The ground floor, accessed from Pitt Street, provided private mail boxes and deliveries of registered mail.  From the ground floor to the fourth connected with the existing GPO; this was where mechanical mail handling occurred.  The upper floors housed the engineering and technical services of PMG. The 9th floor had a staff cafeteria and a dining room.  The building had six modern lifts.

Entrance to the dining room

One interesting feature was a tunnel was constructed to the Commonwealth Bank building in Martin Place (another building in which Henderson was involved) to accommodate the nearly £6,000,000 in cash or gold transferred between the buildings every year.  This was a “very worthwhile insurance” for officials particularly in the light of a recent bank robbery in Melbourne. (SMH 30 March 1939).

The design of the extension and its relationship to the existing GPO was controversial.

“Ultra Modern” was the description given to the building by Mr Brown (SMH 13 January 1938) and he was certainly right.  This severe striped classical building has strong influences of the international style and is very different to the Victorian free classical, Italian renaissance GPO building.

the architecture of the GPO was its outstanding feature.  Everything had been done for architectural effect, and the building did not lend itself to efficiency internally.  The new building will relieve the colonnade in Martin Place of congestion as improved facilities for posting would be given.  (SMH 13 January 1938)

Building labelled it a “fine new building” and a “handsome addition to the architecture of Sydney” and supported choosing a completely different style:

No attempt has been made in the design of the new building to copy the style of the old.  Most rational thinking people will applaud this decision for materials, methods of construction, size of rooms and heights of floors have all changed considerably since the old building was built and to have endeavoured to have emulated an idiom of the past would surely have been a grave error.   (Building 24 March 1941  p10)

Some Sydney architects opposed the design because it conflicted with that of the GPO (SMH 7 February 1941).   The Town Planning Association’s President, Mr R W Ford, was an opponent, stating that:

despite repeated protests the Federal Government has persisted in its grotesque plans for what is termed an addition to Sydney’s General Post Office.

Actually the addition is an entirely distinct building having no relation to the existing structure save the floors are on the same level and the doorways permit staff to pass from one building to the other. (SMH 13 September 1940)

Mr. A. W. Anderson, a. past-president of the Royal Australian Institute of Architects, commented that:

while he would like to see an attempt to make the new building harmonise with the G.P.O., he could not see how it could be done. The new building would be modern, and he was certain that it would not be anything like an extension of the G.P.O., which was a beautiful example of Italian Renaissance architecture. The Commonwealth Bank, opposite the G.P.O.. contained a lot of classical architecture, but could not be made to harmonise with the G.P.O.

Sydney architects had been asking for years, he said, that a representative body be set up to control designs for new buildings in the city, and secure harmony of treatment and design as far as practicable. It would prevent some of the frightful clashes which were to be seen in Sydney. Such a committee would never have permitted certain buildings. The new building for the Post Office was another
example of piecemeal work.  (SMH 13 January 1938)

(In an extraordinary comment for someone seeking “harmony of treatment”, Mr Anderson went on to suggest that the demolition of the GPO itself was inevitable as it could be adapted for future use.  Luckily this was never contemplated.)

One issue was that the existing colonnades of the GPO were not continued in the addition.  The Lord Mayor of Sydney, Alderman Crick, wrote:

It Is regretted that the council has no jurisdiction whatever in regard to the design or the construction of the building, since it is Commonwealth Governmental work. The council has not yet received either officially or unofficially a copy of the plan, although it is customary, as a matter of courtesy, tor plans of Commonwealth
buildings to be erected in the city ultimately to be given to the council for record purposes. The council’s officers were of opinion that a continuance of the colonnading was very desirable. Not only did this facilitate pedestrian
traffic on the footways, but, undoubtedly assisted those doing business In the Post Office (SMH 31 January 1940)

Perhaps the largest issue was the material in which the Extension should be clad.  The tender was released for both sandstone and architectural terracotta.   Sandstone, of course, would be more in sympathy with the existing building, whilst terracotta was the preference of both Henderson and the PMG.

Master builders of Sydney will welcome the calling of tenders for this structure, as few big contracts are now offering, with the result that many skilled workers in the building and allied industries are being disemployed (sic) as the jobs on which they are engaged are completed. (7 February 1939)

Given the sheer size of the tender, competition was intense.  The two closest bidders, John Grant & Sons and H.G. Whittle, had an enormous amount at stake as did their suppliers, including Wunderlich, the makers of terracotta.   This intense rivalry, mixed with ministerial shifts and animosity in Canberra, would lead to the Royal Commission in June 1939.  But more of that later.