This site is dedicated to the life of the Principal Architect of the Commonwealth of Australia (1929-1939), Edwin Hubert Henderson.  Henderson was responsible for a number of notable buildings across Australia, but particularly in Canberra.  He tragically took his own life in 1939 following the Royal Commission into the Contract for the Extension of the Sydney GPO.

In the ten years that he oversaw the building program of the Commonwealth, Henderson made a significant contribution to Australian architecture and the built environment of our country.

Henderson was the chief architect – it was he who directed the style of buildings that the Commonwealth built.  And during his tenure, we see genuine innovation and the adoption of new styles, particularly international influences.

John Smith Murdoch, the first chief architect, built the original Parliament House in a stripped classical style (or modern renaissance as he called it).  While Henderson continued in this style, he definitely moved beyond it, introducing a streamlined moderne style (most notably in his banks) and ultimately a decidedly international or functionalist style (the GPO Extension and the Forrest Fire Station homes show this).   In this sense, he can be compared with notable architects for the state like Paul Cret in the United States. 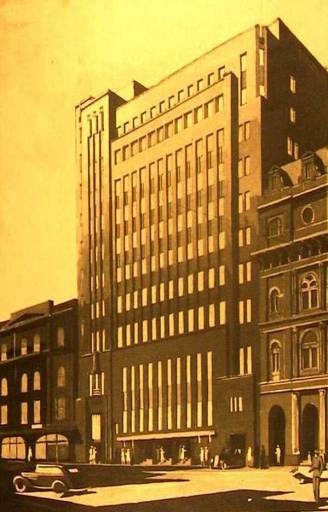 He was, of course, serving his client, the Government and its ministers, and like any architect he had to secure the client’s approval for designs.  The very nature of the client meant that his architecture needed to embody a set of values about how the Government saw itself – and the image it wanted to project.

The impact of his architecture has been described as “progressive yet conservative” and this perhaps best sums up how Henderson balanced the adaption of innovation with the need of his clients to project and image of stability, permanence and purpose.

Achieving this at a time of major economic crisis and financial constraint was not easy.  Henderson did not have the benefit of a New Deal style surge in government building.  Australia adopted a policy of austerity in the 1930s, so Henderson’s building were, of necessity, not grand or massive.  Nonetheless, Henderson still managed to convey the essence of his client’s purpose in buildings of a smaller scale.  In a small country town, his banks stood out for their solidity and their modernity.  This was remarked upon again and again both in professional journals and local papers.  His architecture was not showy, but it was effective – it served its purpose and did it with style.

The critical point is that Henderson set the architectural tone for his office and for the work that his staff did.  Henderson undertook two world study trips during his tenure, and was thus acutely aware of international trends and led the adoption of these in Commonwealth architecture.   He no doubt had talented people working for him, Cuthbert Whitley being a notable example.  However, it is Henderson who would make the call on the design approach and it is he would have to secure the agreement of his superiors and Ministers to these designs.   Thus, whilst he personally designed a great many of the buildings for the Department, the overall output must be a result of his design leadership.  One of the reasons for this website and the book that will come from it is to ensure that Henderson’s role and contribution is fully understood.

Impact: a Broad Scope and Scale

It is important to remember that when Henderson was Chief Architect, the scope of Commonwealth Government building subject to design from Canberra was much broader than it is today.

In particular, the oversight of design for the Commonwealth Bank and the Post-Master General’s Department meant that Henderson was in charge of the design of banks and post offices across the country.   This was in addition to his role in designing buildings for direct use by the Government in Canberra, such as the National Library, the Patent Office or the extension to the Governor-General’s residence.  Because the Australian Capital Territory was administered by the Commonwealth, Henderson also designed local buildings like the Manuka Pool, the new golf club and local schools.  This is a very broad span of public building.

So Henderson’s creative hand can be felt both in the national capitol, but also across Australia in towns and cities, from the Rockhampton Court House to the Commonwealth Bank in Perth, from Duntroon’s barracks to the CBA in Lismore, from tropical housing for public servants in Darwin, to the Gold Key that opened Parliament House in 1927.  His imprint is truly national.

Henderson designed large buildings – like the massive GPO Extension in Sydney, and the Bourke St Headquarters of the Commonwealth Bank.  Perhaps his greatest work would have been the National Library in Canberra, which alas was only realised in small part.  But he also designed small buildings, like his own home in Red Hill in Canberra that he built after he married his second wife, Muriel.   Here was an architect that was versatile and could operate at very different scales.

“Hendy” as his friends called him, was a remarkable architect who made a significant contribution to Australian architecture.  His own life is both interesting and mysterious.  What impelled him to leave Newcastle and come to Australia?  Was it an unhappy family life with a father suffering from mental illness?  What happened to his first marriage that ended so unhappily?   What was going through his mind in the lead up to his testimony to the Royal Commission?   Why, as his final note said, did he feel betrayed by his friends?   He played the organ at the Methodist Church in Canberra, but didn’t stay for the sermons – was he religious or not, or did his divorce impact upon his interest in church?   There is much to discover.

I am writing a book on Henderson’s life and works.  If you can help, please contact me.  My email is paulmartyn2004@yahoo.com.au.

4 comments on “Why Henderson Matters”